Images from the Tacoma Public Library 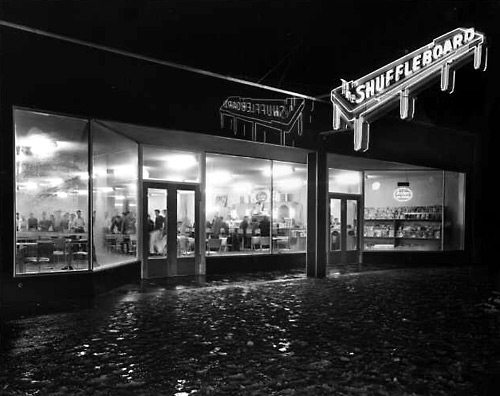 The Shuffleboard is the newest family restaurant in Tacoma; it is located at 3805 South G Street, and is owned and operated by Marvin Halley. The Shuffleboard has 8 new shuffleboards, a soda fountain with full snack bar and ice creams, tables and chairs, music, great lighting and air conditioning. This is the first place to offer shuffleboard to the general public in the Northwest. Exterior view of new restaurant people are inside at the grand opening event; electric sign in shape of shuffleboard machine and "Arden" ice cream signs in window. 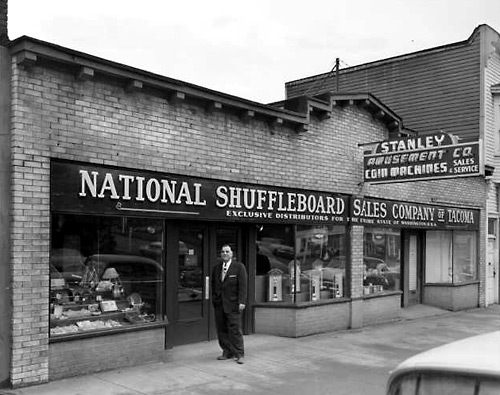 An unidentified man stands in front of the National Shuffleboard Sales Company located at 1119 Tacoma Avenue South across the street from the Main Branch of the Tacoma Public Library. Both the Stanley Amusement Co. and the National Shuffleboard Sales Co. of Tacoma were owned by Stanley Kolitzoff and George Sellers in the mid-1950's. The shuffleboard company was the exclusive distributor of shuffleboards for the entire state. Trophies were on display in the storefront windows as well as clocks, blankets and other items used for prizes. The Stanley Amusement Co. sold and serviced coin machines, including apparently riding horses like the one located in the store's display window. This store, originally built in 1922, is currently being restored. ( Photograph ordered by Stanley Amusement Co.) 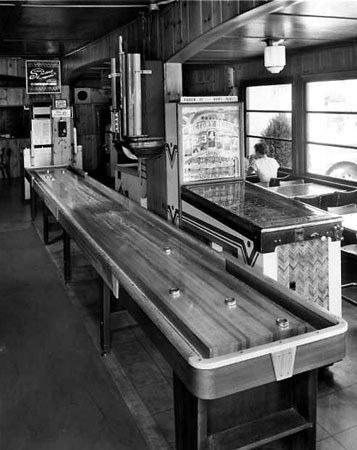 Shuffleboard with electric scoreboard at Primos, Champion Sales & Distributing Company. An indoor shuffleboard sits in the middle of the floor next to another arcade machine. Tables and chairs sit near the windows in the right. A sign at the rear of the room warns that no one under 21 years of age is allowed on the dance floor. Primo's was opened in 1938 and reopened in 1940 after additional remodeling by owners Primo and Joan Gasperetti. (T.Times, 3/5/1940) 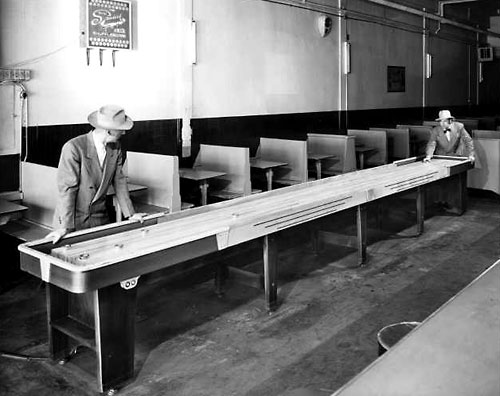 Shuffleboard and electric scoreboard at Central Tavern, Champion Sales Distributing Company, Mr. Vern Westby. Two men are trying out the shuffleboard at the Central Tavern. The electric scoring machine is hung on the wall over booths running along one side of the tavern. An edge of the bar and a stool can be seen in the foreground. 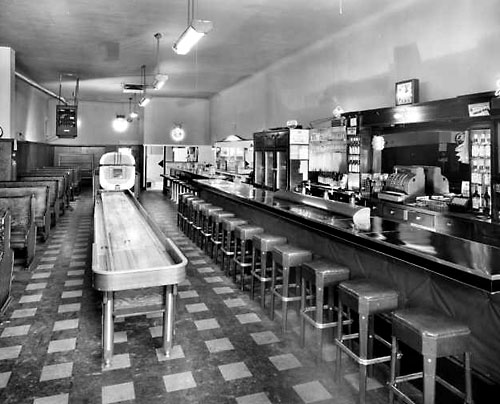 K Street Club was owned and operated by John J. Hafsos and Lawrence J. Corvari. K Street Club was located at 1111 South K Street, in Tacoma's Hilltop neighborhood. Interior view of K Street Club, a shuffleboard table is set up in the center, jukebox behind the game table, booths on left side, bar and lunch counter on right side; a cash register behind the bar. Photo was ordered by the Washington State Liquor Board, likely for a renewal of their liquor license. 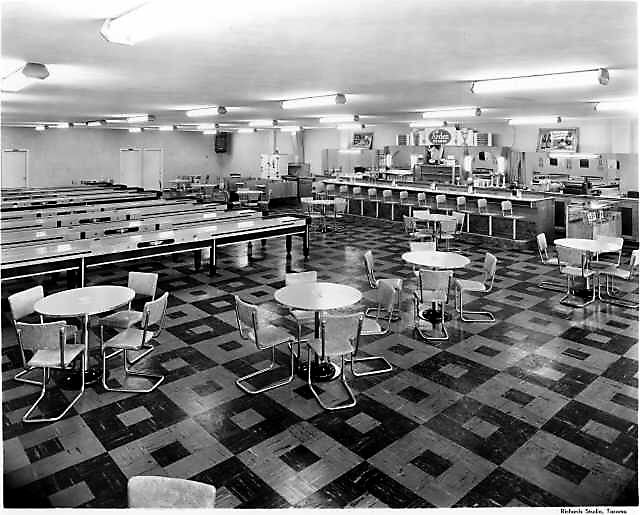 Opening of "The Shuffleboard" at 3805 South G Street. It was a family restaurant were Shuffleboard instructors were on hand and prizes were awarded every night.